“These fellows make up the better part of my musical life. Together we make a traveling community. It’s been that way for half of my days. Long may it remain so. Each of these guys individually is a creative force with his own prodigious body of work, Each is recognized throughout the musical world as a master of his own axe. Together they are even more than the sum of their parts. When they release a new batch of fresh tunes it is a gift, to be sure, and a cause for celebration. I’m often asked to talk about music but really, it’s all in the listening. I wish you the joy of it.”  —  James Taylor, 3/31/18 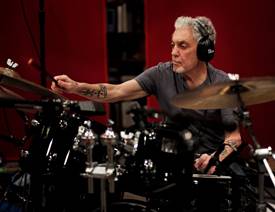 On their self-titled fourth album released by BFM Jazz on March 23rd, Steve Gadd, the veteran drummer, shifts once again into the position of leader and producer, roles with which he feels increasingly confident at this stage of his lengthy career. “All the guys in the band are good friends of mine, people I like being around—not just musically but in general,” Gadd says. “It’s great to be able to play with guys you like and create more opportunities to keep playing with them.”

One of the most highly acclaimed and prolific drummers in history, Steve Gadd has performed on literally thousands of sessions and live gigs for more than four decades. He has supplied the core rhythmic foundation on iconic recordings from astounding A-list artists from Steely Dan, Paul McCartney, B.B. King, George Benson, James Brown and Al Jarreau, to cite just a tiny percentage of his discography. Here’s what a few of these artists have to say about Steve Gadd:

Paul Simon says: “[Gadd] is the premier drummer of his generation.”
Eric Clapton calls Steve Gadd: “One of the great drummers I’ve played with.”
Chick Corea describes him as: “A master of creative grooves.”

Most players with a résumé boasting even a fraction of Steve Gadd’s credits would be content to collect the accolades that come with being a successful sideman. But for Gadd, acting as a first-call utility player is only part of the story.   “When you play with guys you respect musically, you evolve; that’s what happens,” Gadd says. “We all play together with James already so we know each other well, but the more we play as a band, the more comfortable we get with these tunes. It just sort of happens naturally.”  Each of the five band members contributes original song material to Steve Gadd Band, bringing to the 11-track album a wide variety of moods, textures and tempos.

The sessions took place at Sphere Studios in North Hollywood, California, at the tail end of 2017. “When we went into the studio—and this was my first time using this studio—we knew what we were gonna do, but we were working on the arrangements at the same time. That was the process,” Gadd says.

Some of it was composed specifically for this project and some tunes were waiting for the right home. “I either think a song is good for us or it isn’t. But I think all of it works,” says Gadd about the new album. “We had a few days where I hung out with the guys individually and we listened to the stuff and decided what we were gonna do,” he adds.

Steve Gadd Band opens with “I Know, But Tell Me Again,” one of three songs contributed by Johnson. (On this track Gadd is a co-writer.). A perfect example of what Corea describes as a “creative groove,” the deeply funky jam showcases the rhythm section and allows generous stretching-out space to Hays and Landau. It also features Duke Gadd, Steve’s 34-year-old son, who adds percussion to this and a couple of other tracks, and acoustic guitar to another. “Duke is a drummer too but he plays a bunch of different instruments,” Steve says. “I’m really happy that he was able to be involved. It was a great opportunity for us to be together musically.”  “Auckland By Numbers,” an ethereal, atmospheric ballad written by Landau, is one of Gadd’s personal favorites on the album, although he emphasizes that he enjoys every track. Duke Gadd, Michael Landau and Kevin Hays co-wrote track 3, “Where’s Earth?,” another exercise in the art of the polyrhythmic groove, featuring Duke’s own acoustic guitar work and serving as a reminder of just how deftly his Dad can navigate tricky rhythmic changes and make it look easy. “Foameopathy,” another one of Steve Gadd’s writing contributions along with Larry Goldings and Walt Fowler, follows, juxtaposing open spaces, spellbinding solo spots from Fowler and Landau, an air-tight bottom line and the high-level ensemble playing one expects from musicians of this caliber, so familiar with the importance of locking in snugly around a theme.

“Skulk,” the next track, is borrowed from Larry Goldings (again, with Steve as the co-writer), the keyboardist who served with the band on its first three releases. An up-tempo, feel-good rhythm sits at the base of the tune while Hays and Landau explore the melody down several different paths.   Johnson’s second contribution, “Norma’s Girl,” unfurls at an unhurried pace, allowing Fowler, in particular, to open up with one of his more stirring solo spots.   Landau’s “Rat Race” projects an appropriately urban feel, all sharp edges and crisp licks, with Johnson’s “One Point Five” bringing a quasi-Latinesque flavor to the proceedings, the two Gadds drumming circles around one another throughout.

“Temporary Fault” is the only cover song on the album. It comes from the canon of Allan Holdsworth, the master guitarist who left us last year. A hero to both the jazz and prog-rock communities for his axe-work, Holdsworth was also a composer of grace and style, as evidenced by the loving tribute the quintet brings to this track from the author’s 1982 I.O.U. album. The song has special meaning to Jimmy Johnson.

“He used to play with Allan,” says Gadd, “so it’s a tribute. “It’s great to find material that the guys are connected with, with a little bit of history.”

Rounding out Steve Gadd Band are “Spring Song” and “Timpanogos,” respectively compositions on the collection by Hays and Fowler. The former is the lone vocal number on the album, Hays giving the ballad a soulful reading that sends the music in a whole other direction for five glorious minutes, while the latter provides one final occasion for each of the band members to display both their unassailable individual chops and uncanny knack for stellar interactivity.

Don’t expect a solo from the leader himself, however. This album, says Gadd, was not the place for that sort of exercise. “I didn’t on the record but I play solos a lot when we play live,” he says. “We might do a live album with some of the same stuff after the band’s played it for a while and probably there will be more drum solos in that.”