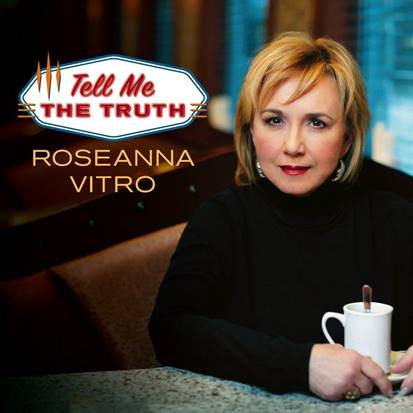 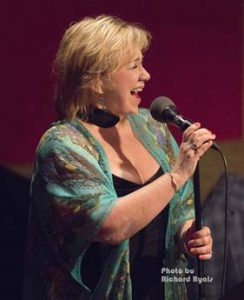 The songs featured on Grammy Nominated vocalist Roseanna Vitro’s new album, released on Skyline Records, Tell Me the Truth, have been harvested from the rich soil of America. They are the roots and vines of our Southern musical tradition, seasoned by the regional colors of gospel, blues, jazz, r&b and country. They speak to and for Roseanna Vitro. It is a soulful album, drawn from living, breathing and internalizing a rich array of musical cultures and life experience. Its essence is the surround sound of her youth, featuring songs written or popularized by mentors: Jon Hendricks, Allen Toussaint, Mose Allison, Mavis Staples, Boz Scaggs and The Everly Brothers, among others. They are newly imagined renditions, reborn with arrangements and group interplay that highlight Vitro’s penchant for story-telling and musical colorization. It is the fourteenth recording in her distinguished catalog.

This amalgam of music shaped the underpinnings of Roseanna’s artistry, which has grown like the roots of a tree, inspiring her to perform and record American classics by Gershwin, Duke Ellington, Rodgers and Hart, et al., as well as the celebrated “modernists” of post-WWII America, Ray Charles and Randy Newman. Tell Me The Truth features her coming of age music reimagined in today’s context, much as the cultural, racial, and political tensions of today mirror the zeitgeist of the sixties.

The album’s success owes much to the tight-knit collaboration on arrangements between Roseanna and pianist, Mark Soskin. They are a formidable team, achieving great success with The Music of Randy Newman (Best Vocal Jazz Grammy Nomination 2011) and Clarity, the Music of Clare Fischer (2014).

The Southern Roots band includes guitarist, Mitch Stein, saxophonist Tim Ries, trumpeter Nate Eklund, bassist Dean Johnson, drummer Rudy Royston, plus special cameo appearances by Philadelphia soul singer, Al Chestnut (“Respect Yourself”), violinist Sara Caswell, vocalists Kate McGarry and Cindy Scott (“I’ll Fly Away”).
The songs of Tell Me the Truth trace the musical journey of a southern girl born into a family of gospel singers who insisted “all things are possible.” She left Texarkana, drawn to Houston and the bandstand of tenor titan Arnett Cobb. Eventually she landed in the West Village of New York City, where she flourished. Vitro has recorded and toured with a host of jazz musicians – among them, Fred Hersch, Kenny Werner, Elvin Jones and Fathead Newman. She is a vocal jazz educator and U.S. jazz ambassador. Her career has embraced bold and creative musical choices. She favors infectious grooves and melodic invention. On Tell Me the Truth, she speaks from the heart, echoing themes heard in previous projects, yet crystallized by the urgency of the times. She is a musical activist, using her art to open hearts and minds.

On Your Way Down (Toussaint)
Walkin’ After Midnight (Block, Hecht)
Respect Yourself (Ingram, Rice)
I’ll Be Long Gone (Scaggs)
Fortunate Son (Fogerty)
When Will I Be Loved (Everly)
Tell Me The Truth (Hendricks)
Your Mind Is On Vacation (Allison)
Foolin’ Myself (Razaf, Waller)
I’ll Fly Away (Brumley)
A Healing Song (Yamin, Carlson)