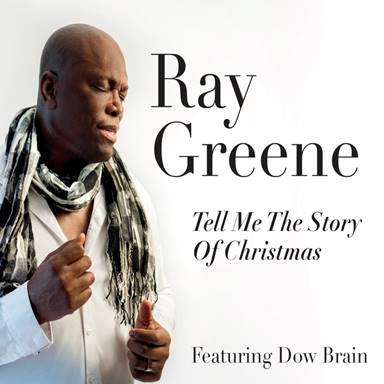 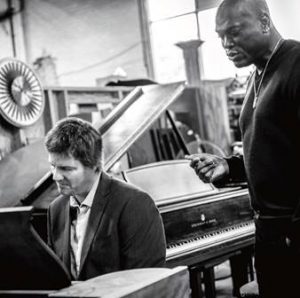 Ray Greene is a singer, songwriter, producer and multi-instrumentalist, currently on tour as the lead singer for Carlos Santana. He has teamed up with composer,  pianist and platinum producer Dow Brain to create a jazz-influenced holiday recording, Tell Me the Story of Christmas.

While the two have collaborated on other projects, this Christmas album, laden with sweet, yet sophisticated jazz/gospel versions of holiday standards, and three original compositions, is a project long desired by both artists. “I’ve wanted to do this album with Ray for a long time; he’s just so incredibly talented” says producer/pianist Brain.

The album, Tell Me the Story of Christmas, includes three original compositions penned by Greene and Brain, including the title track. The Christmas classics on the album include “Silent Night,”  “Christmas Time Is Here,” and a stunning African drum version of “Little Drummer Boy.”

Brain and Greene have both done their share of touring with big names.  Greene cut his teeth singing back-up vocals for Aretha Franklin and Rick James, and then landed the gig singing with the popular Bay area funk band Tower of Power. Brain, in addition to doing “time” at Boston’s own Wally’s Café, has also played with Andre Ward, Brian McKnight, Matt Garrison, Walter Beasley, John Coltrane’s drummer Rasheed Ali, and with the late Dizzy Gillespie at the Blue Note in New York City.

RAY GREENE
Ray Greene, lead vocalist for Carlos Santana, is a singer, trombonist, and producer living in Boston. He received a degree in Music Performance at Berklee College of Music. Even though he was brought up hearing the great soul/R&B legends of our time, Greene is equally adept at the traditions of gospel, jazz, and blues.

Greene has performed and recorded with several of the most successful and influential names in the fields of pop, funk, and R&B: most notably Aretha Franklin, Natalie Cole, New Kids on the Block, and Rick James, to name a few. Greene was the lead vocalist/trombonist for the legendary soul band Tower of Power.

Greene was honored to perform with Maya Angelou at the Boston Opera House. The world renown poet laureate recruited Greene to perform a capella renditions of her favorite inspirational hymns to open the engagement.

DOW BRAIN
Dow Brain is a pianist, composer, songwriter and producer. He has had a precocious love affair with the piano since age five. Brain and stellar engineer/producer Brad Young’s company, Underground Productions, Inc. has been operating in Boston since 1990 and has earned five RIAA certified Platinum and Gold albums and singles, including a Platinum single for the number-one selling song “Summer Girls,” recorded by LFO on Arista Records while under Clive Davis’s direction.