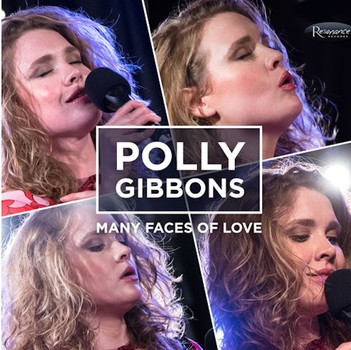 “A truly exceptional, once-in-a-generation talent, possessing a voice of such sizzling intensity and raw emotion you could fry an egg on it.” – Jazzwise magazine

“A soulful young jazz vocalist destined to be a star!” – Time Out London

It’s not only the music press that has lined up to gush about the young vocal sensation Polly Gibbons. No less an icon than Van Morrison declared, “She’s got a great voice!” and Joss Stone said, “I love her voice, it’s really soulful. I can’t wait to hear more of Polly…”

Now, the wait is over! On Feb. 3, 2015, we can all hear Polly Gibbons when this supremely talented artist—nominated for a BBC Jazz Award in 2006, releases Many Faces of Love, her debut album and DVD release for the U.S. market.

Polly Gibbons descends from a grand tradition of jazz and blues women whose singing exudes strength, defiance and sassy wit. There are many pretenders to that throne, but Gibbons’ artistry demands attention. British-born and just 30 when she made this album, Gibbons possesses a raspy, lived-in tone, a walloping sense of swing and a dramatic flair that grabs the heart. Emotionally, her singing ranges from a slow burn to a bonfire; interpretively, she always rings true. In London jazz circles, Gibbons has been acquiring a growing chorus of champions since her emergence a decade ago.

For Many Faces of Love, Gibbons has assembled a crew of some of the most skilled musicians in contemporary jazz. Her band is led by L.A.-based pianist and arranger Tamir Hendelman, who conjures up the slamming grooves, the feistiness and the jubilation that mark Gibbons’ singing. Also accompanying Polly on the new release are violinist Christian Howes, guitarist Anthony Wilson, bassist Kevin Axt and drummer Ray Brinker.

Gibbons, who names artists as diverse as Mahalia Jackson, Joni Mitchell, Charlie Parker, Leonard Cohen, Donny Hathaway, Nina Simone, Marvin Gaye, Prince and D’Angelo as key influences — is also a songwriter whose original composition “Midnight Prayer” won
first place in the Indie International Songwriting Competition. For Many Faces of Love the singer has chosen to emphasize her interpretive skills. Whether on the R&B nugget “Please Send Me Someone to Love,” Bob Haymes’ “Make It Last”(from a 1958 Betty Carter recording), Dr. John’s “City Lights,” Al Jarreau’s “Not Like This,” Rickie Lee Jones’ “Company” or Patti Austin’s “That’s Enough for Me,” Gibbons drills to the core of the lyric and melody, making each song her own.

Gibbons’ magnificent command of a jazz ballad is exemplified by her steamy take on “After Hours,” an early Sarah Vaughan trademark, and she does wonders with “I Have the Feeling I’ve Been Here Before,” written by pianist Roger Kellaway with Alan and
Marilyn Bergman for Carmen McRae. “Love Comes and Goes,” meanwhile, is a gem from veteran British songwriter Carroll Coates.

Polly Gibbons’ Many Faces of Love reveals a young woman who, musically and emotionally, is wise beyond her years.