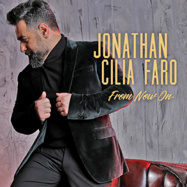 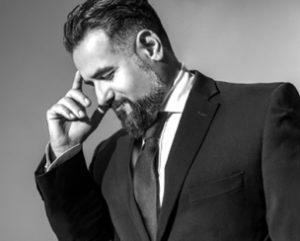 Golden sound, brilliant intensity, sheer romance – the thrill of the Italian tenor voice is back on From Now On, the U.S. debut album from tenor Jonathan Cilia Faro, released on April 26th by SONY/BFD/The Orchard.

A Sicilian by birth who grew up in Tuscany, now a “global citizen,” Cilia Faro fell in love with singing and the tenor voice when, at the age of 9, he heard a recording of Luciano Pavarotti, the “King of the High Cs,” singing Rodolfo in La Bohème. Cilia Faro was inspired to develop his own, unique pop/operatic style – echoing the glorious tradition of the Italian tenor – and he celebrates that with From Now On.

The expressive power and splendor of the tenor voice is showcased in this all-new collection of songs. Cilia Faro himself produced From Now On with Matteo Cifelli (Il Divo, Tom Jones, Robert Plant). Collaborating are five acclaimed arrangers known collectively for their work with Tom Jones, Il Divo, Alfie Boe, Michael Ball, Alan Parsons and Bryan Adams. The album’s musical director, Emanuele Chirco, has performed for all four recent Popes. He created the arrangements for From Now On with Nicolo Fragile, Peppe Arezzo, Gary Wallis and Ben Trigg.

As if to confer a blessing on this important new project, Jonathan Cilia Faro recently came to the attention of the Vatican.

The tenor was invited, just ahead of the album’s release, to perform at a gala event to support the ecumenical and humanitarian efforts of the Cardinal Angelo Sodano Holy Land Foundation, under the patronage of His Eminence, Angelo Cardinal Sodano, Dean of the College of Cardinals.

From Now On was six years in the making, during which today’s pop/operatic tenors began to lean more in the direction of contemporary pop sound. Cilia Faro has made the courageous choice to produce an album that reflects the Italian pop/operatic style – renewing a beloved tradition that goes back a century, to Enrico Caruso, and reached its zenith in the meteoric success of Mario Lanza.

Forging big melodies with full symphonic orchestration, showcasing his exciting voice, Cilia Faro travels the spectrum, from classical opera to modern-day pop, on From Now On. Each of its twelve tracks marks a step of the tenor’s artistic life. He poured all of his twenty-five years of creating and performing music around the world into choosing the songs.

ABOUT THE SONGS: (written by Jonathan Cilia Faro)

1. Il Cuore Naviga: Lyrics by Antonio Galbiati, Kaballa and Jeff Franzel. This song opens a new chapter in Jonathan Cilia Faro’s life. The songs talk about reaching your own personal destination in life. To reach for your dreams and sail towards your own destiny. We all need to find our own special island where we can dream in peace.

3. Come un Amico Ama: Lyrics by Francesco Romeo and Martina Romeo. 20 years of friendship has given life to this beautiful song that speaks of unconditional friendship between two people who have shared difficulties, joys, sorrows, and true friendship as it was never described before.

4. Giramondo: Lyrics by Paolo Marioni. Giramondo describes a man who never stops moving forward. A man who travels the world bringing with him the passion of music.

5. Sorprenderti: Lyrics by Jonathan Cilia Faro. Sorprenderti means to surprise you. This song speaks of a true and sincere love, a love that forces you to make drastic and irreversible decisions, but also makes you believe in the beauty, sincerity and importance of a true love.

6. Per Sempre: Lyrics by Antonio Galbiati & Vincenzo Incenzo
This is a song about life in a chaotic world, a place that has lost values and morals. Per Sempre describes the desire to give humanity a new chance. Forgiveness is a powerful tool, which can be used to connect us all and to move humanity in the right direction. Unconditional love will last forever.

7. From Now On: Lyrics by Jonathan Cilia & Polly Veronica. This is the song that gives the album its title. It fulfilled a need to create lyrics that spoke of a change and that had a 90’s sound. This song is a turning point, “from now on” everything changes and it starts Cilia Faro’s career once more.

8. Fine Non Ha Mai: Lyrics by Antonio Galbiati, Cheops and Jeff Franzel, a song written by some of the most respected writers of Italian music in the world. These writers have created beautiful music performed by such greats as Andrea Bocelli, Josh Groban, Laura Pausini, Eros, Alysha and many others. This song speaks of everlasting love…a love that defies all expectations and teaches us that there are no limits. If love is pure it will never end.

9. Meravigliosamente: Lyrics by Serena and Paolo Marioni and Eugenio Vinciguerra. When you meet your true love, everything changes. Everything you focus on becomes clear; emotions, intentions and feelings are described with a single word “marvelous”!

10. La Musica Fa Parte di Me: LLyrics by Jonathan Cilia Faro and Domenico Arezzo. Music composed and arranged by Peppe Arezzo. This very personal song and was written as autobiographical by an artist who has experienced darkness in various forms. The dream of creating new life, of living for the future and being thankful for every day is explored in this beautiful piece of music. Thanks to the love for life and the will to never surrender we fight on. Domenico Arezzo’s first experience with cancer was in the role of a husband taking care of his wife. Unfortunately, she left this world much too soon. Jonathan has fought his own fight with this terrible disease. He considers himself lucky and this song promotes hope and light to those affected by the darkness of cancer. It was through music that Jonathan found his way out of the darkness.

11. Una vecchia amica: Lyrics by Jonathan Cilia Faro. This song is dedicated to an imaginary friend who has accompanied Jonathan in this musical journey for 25 years. Nothing happens by chance. Obstacles and difficulties are encountered in every moment of one’s life and it will be that voice inside of you that will give you the strength to start again and again and again. To fail is important because it is the starting point from which you can reach the goal you have always dreamed of.

12. I Love How You Love Me: Lyrics by Barry Mann and Larry Kolber. This is a re-make of a romantic song written long ago, when love was simple and pure. I love how you love me makes us think of the days when “less was more”.