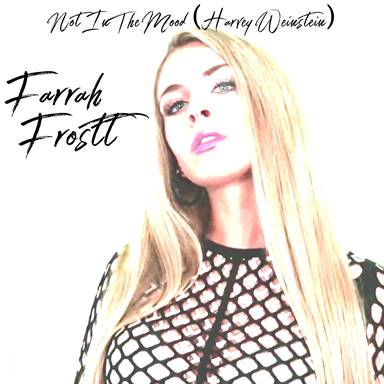 Farrah Frostt: A New Voice in Hip-Hop Steps Out with Debut Single “Not in the Mood (Harvey Weinstein)”

Hip-Hop artist Farrah Frostt releases her debut single, “Not In The Mood (Harvey Weinstein),” produced by Sam Sneed and Mike Perrotta. It is a bold rap song, a timely debut expressing a unique reaction to the #MeToo movement. Frostt is all about empowering women and putting creepy, pushy men in their place as she sings, “I’m Farrah Frostt, biiaattch!”

Frostt is an American rapper, singer, songwriter, SAG-AFTRA actress, (trained by John Astin and Peg Denithorne), and model. She is also a trained hip-hop, tap, ballet, jazz and lyrical dancer. Frostt earned her B.S. in Neuroscience, B.A. in Writing Seminars, B.A. in Medicine, Science & the Humanities, and minor in Theatre as a premed at Johns Hopkins University. She performed research for Johns Hopkins Neurosurgery, Pancreatic Immuno-Oncology, Ophthalmology and Cardiology departments and is a U.S. News & World Report Contributor on behalf of Johns Hopkins Cardiology.

She’s quite the science nerd, but also has a creative flare, swagg, and a passion for music. From neuroscience to Hip-Hop, Frostt honed her rap skills under the tutelage of producer Sam Sneed from Death Row Records who produced Dr. Dre, Snoop Dogg, Jay-Z, 50 Cent, and others.