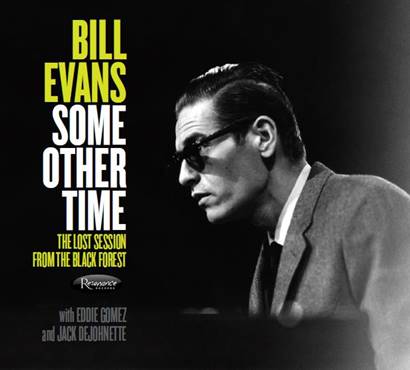 Bill Evans | Some Other Time: The Lost Session from the Black Forest

Unique studio recording made on June 20, 1968, five days after the Bill Evans Trio’s triumphant performance at the Montreux Jazz Festival.

Only the second album — and the only studio album — to feature the Bill Evans Trio with brilliant drummer, Jack DeJohnette, and great bassist and Evans Trio veteran, Eddie Gomez.

These recordings were only recently discovered in the Brunner-Schwer family archives. 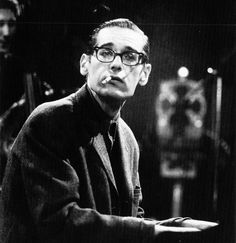 Los Angeles, CA. March 18, 2016 – Resonance Records is pleased to announce the release of Bill Evans Some Other Time: The Lost Session From the Black Forest, a previously unknown and extremely rare studio album by the Bill Evans Trio recorded on June 20, 1968 by legendary German jazz producers Hans Georg Brunner-Schwer and Joachim-Ernst Berendt. Resonance will release this album — which has never before been issued in any form — on Saturday April 16, 2016 in a special limited-edition hand-numbered two-LP set on Record Store Day, and will release a deluxe two-CD set and a digital edition on April 22, 2016.

Zev Feldman of Resonance Records may just be the world’s greatest jazz detective He is quickly developing a reputation as the Indiana Jones of jazz. His uncanny ability to unearth hidden treasures — recordings no one has heard; indeed, recordings that no one imagined existed — is unmatched today. Once again, Feldman’s dogged determination in the pursuit of great jazz recordings combined with label head George Klabin’s unstinting support has borne fruit in the discovery and release of this remarkable new Bill Evans album, Some Other Time: The Lost Session From the Black Forest.

Resonance Records is thrilled to bring this important addition to Bill Evans’s legacy to the world, a recording that constitutes the only existent studio recording of the Bill Evans Trio in the iteration that featured drummer Jack DeJohnette together with bassist Eddie Gomez, a version of Evans’s trio that only existed for six months in 1968.

Feldman discovered this previously unknown recording by chance. In April, 2013 in Bremen, Germany at the Jazzhead trade conference, he happened to meet a son of late great German jazz producer, Hans Georg Brunner-Schwer (familiarly known as HGBS), the founder of the legendary jazz label, MPS. While comparing notes with the younger Mr. Brunner-Schwer, Feldman discovered that HGBS’s family had in its archive an unreleased studio album by the Bill Evans Trio featuring Eddie Gomez and Jack DeJohnette.

After hearing one track on a car stereo in the parking lot outside the convention hall, Feldman was bound and determined to acquire the album for Resonance. He was convinced the world had to hear this music, which represents an under-documented chapter in Bill Evans’s creative journey. Bill Evans studio albums are rare in themselves and this particular make-up of the Evans trio, which was only together for six months, had never recorded in the studio; the only recording of this particular group that’s been available is a live concert recording made at the Montreux Jazz Festival five days earlier that was released on Verve.

This album sat virtually unnoticed for nearly fifty years in part because of the way it came into existence in the first place. It had been recorded on the spur of the moment. Noted German Jazz producer and writer Joachim-Ernst Berendt had heard the Evans Trio’s performance at the Montreux Festival and was so impressed, he urged both HGBS and Bill Evans’s manager, Helen Keane, to bring the trio to HGBS’s MPS studio in Villingen in the Black Forest to record between tour stops during June of 1968. The hastily thrown-together recording agreement provided that no release could be made without certain approvals. After all, Bill Evans was under contract to another label. As time passed, contractually, no one seemed to have picked up the ball, so nothing happened. So the tapes sat. And they sat out-of-sight, out-of-mind in an archive in the Black Forest, a location far from Bill Evans’s and Helen Keane’s normal ambit. After some years with the tapes all but forgotten, the principals all died. Evans, Helen Keane and Berendt were all gone by 2000, and HGBS passed away in 2004. By then, the album had become, in effect, a forgotten historical relic.

Fast forward to 2013 and enter premier jazz detective Zev Feldman, who never loses an opportunity to explore what unknown recordings may exist when he meets someone with a connection to jazz. He met a member of the Brunner-Schwer family and with a little digging and a lot of determination, he found himself on the trail of another historically significant unknown jazz recording begging to be released.

It wasn’t a simple matter to bring this music to the public, but once Feldman knew this album existed, he was unflagging in his determination to make it happen. When he finally heard the entire album, he describes the experience as revelatory: “It blew my mind to hear it. THIS was why George [Klabin] sent me half way around the world to Germany: to search out rare recordings like THIS.” After several trips to Europe to shepherd the project forward, in 2015, deals were finally struck with all the necessary parties and Resonance was able to move forward with the release.

Bill Evans is one of the most influential pianists in the history of jazz. In his essay for the album package, journalist, author and jazz historian Marc Myers describes Evans’s career as comprising four distinct periods or stylistic phases. The first of these Myers describes as Evans’s “jazz apprentice years,” a period that extended from 1953 to 1961, during which time, he performed often as a sideman, but also began recording as a leader. The second period, which Myers styles Evans’s “swinging romantic” period spanned from 1961 through 1966, where he began to come into his own as a force in jazz. This was followed by a period Myers calls Evans’s “percussive poet” phase, which Myers maintains was propelled by the introduction of bassist Eddie Gomez into Evans’s musical milieu. The percussive poet period lasted until 1978. Myers refers to Evans’s artistic phase during the last four years of his life — from 1978 to 1982 — as his “lost soul” years.

This album captures Bill Evans at an important, yet relatively under-recorded time in his career. Myers describes it as an important document that sheds light on Evans’s transition from swinging romantic to percussive poet.

And although Eddie Gomez was to remain a colleague of Bill Evans’s for many years and a collaborator with him on numerous recordings, because of the discovery of this album featuring the Evans trio with the addition of Jack DeJohnette, Myers believes that there is now a much more solid basis for considering this brief association as an important chapter in the Evans saga. Myers writes:

The material also brings into relief Evans’s all-too-brief encounter with Mr. DeJohnette, a member of Evans’s trio for just six months in 1968. During that time, his tender, kinetic drumming style caught Evans’s ear, educating him on the interplay possible when percussive figures are feathery and challenging. [Up until now, the only commercially available recordings of Evans and DeJohnette have been scarce]; hardly enough to evaluate Mr. DeJohnette’s contribution to the trio or his influence.

With the addition of The Lost Session From the Black Forest, we have a more complete picture of Mr. DeJohnette’s impact. During the musical discourse between Mr. DeJohnette and Evans, we hear clearly the sound that Evans wanted on drums going forward. In short, Mr. DeJohnette’s swarm of gentle, abstract snare figures and pesky cymbal rustlings created a dramatic and provocative backdrop without encroaching on Evans’s lyrical narrative.

In his essay included in the album package, Friedhelm Schulz, the current managing director of HGBS Studios, makes some observations regarding the significance of Bill Evans recording in MPS’s Villingen studio with HGBS. Schulz writes:

In 1968 Bill Evans already had the delicate, sophisticated, searching approach that was his trademark and which established his reputation as an exceptional pianist and a star on the piano jazz horizon. No pianist before him had such expressive power and such varied moods and feelings as Evans. Perfectly and appropriately complementing his sensitivity were bassist Eddie Gomez and drummer Jack DeJohnette. Now Evans was in the Black Forest, where beginning in the early ‘60s, Oscar Peterson played regularly in the living room of producer Hans Georg Brunner-Schwer, a man who had a reputation for innovative recording techniques. Even Duke Ellington had come there and was persuaded to record a spontaneous session in 1965 in the same living room.

Bill Evans Some Other Time: The Lost Session From the Black Forest, was produced by Zev Feldman along with executive producer George Klabin. Sound restoration is by Fran Gala and Klabin. The exceptional package was designed by Burton Yount.

Producer Zev Feldman adds, “We at Resonance are thrilled to be able to share this important new document with the world, one that sheds light on a previously little-known phase in Bill Evans’s career. That it was recorded at the historic MPS studio by the great Hans Georg Brunner-Schwer makes it all the more special for me, because I’ve been a big fan of MPS and HGBS for as long as I’ve been collecting records. And I want to thank everyone who made it happen — the Bill Evans Estate, the Brunner-Schwer family, Friedhelm Schulz, Eddie Gomez, Jack DeJohnette, Marc Myers, all the photographers and their representatives, Cynthia Sesso at CTSImages, Burton Yount, everyone at Universal Music Group and Jazz Institut Darmstadt, everyone at Resonance Records who helped shape this release, and finally above all, I want to thank George Klabin who made it all possible.”

This just might be one of the most exciting experiences in my production career so far. When we sought out to assemble the package (on top of great music) I felt we also needed to create one of the nicest packages in Evan’s discography. I’ll leave that to the fans but I feel we accomplished just that with this newly unearthed gem.