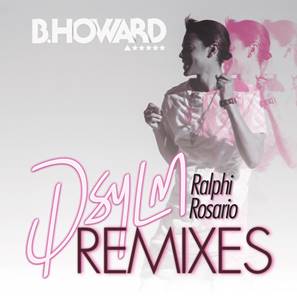 B. Howard’s single “Don’t Say You Love Me” moves up to #16 on Billboard Magazine’s Dance Chart, Dec. 26th issue.

The song is the dazzling result of a promise that superstar Akon made to his friend B. Howard saying that he would deliver some hits to him. He mentioned that commitment on the nationally televised “Larry King Show”. Akon then hooked “B” (Brandon) up with Gibson Kagni and “Don’t Say You Love Me” was born.

Born Brandon Alexander Howard in California, “B” is the son of sensational R&B vocalist Miki Howard (managed by Joe Jackson). Brandon was raised at Hayvenhurst, the Jacksons’ family home.

B arrived on the world stage via collaborating with Wyclef Jean and Jazmine Sullivan on “Ke Nako,” a musical homage to Nelson Mandela that he produced and sang on. The song was included on Listen Up! The Official 2010 FIFA World Cup Album on Sony Entertainment Worldwide. This thought-provoking hit arrested the attention of Universal Japan which signed B and released his debut album, Genesis. Japanese audiences fell in love with “B” thanks to his hits “Super Model” (Top 20 MTV Japan) and “Dancefloor” (a scintillating throwback jam on which B brought together veteran arranger Benjamin Wright with contemporary producers James Poyser and Questlove).